Wasps are very territorial and will avoid an area that’s already occupied by another wasp colony.

They are generally made of paper or plastic. These nests come with a loop at the top and back. You can hang them on your porch, trees around your home, or any elevated areas.

What are Fake Wasp Nests Supposed to Do?

Fake wasps nest keeps wasps away from your home.

Studies show that wasp creates territorial boundaries. They avoid any areas where there is already an established nest. To do this, wasp use landmarks.

Because waps are territorial, you can use wasps nests to trick wasps into thinking another colony already claims your home.

Wasps nests are a great way to keep paper wasps away, but they will not work on wasps that nest in the ground.

Ground nesting wasps such as yellowjackets, cicada killer wasps, and digger wasps are all ground-nesting wasps.

Also, the exact distance wasps will avoid based on the territory is unknown. This means that wasps may create a nest on one side of your yard if your fake wasps’ nest is on the opposite side. 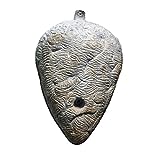 Wasp nests are effective, but they only work on certain types of wasps. In particular, wasp nests do not work on ground wasps. This is because ground wasps live on the ground away from any hanging nests.

Another reason wasp nests may not be effective is that it lacks wasps pheromones.

When looking for a place to nest, wasps rely on their vision and use pheromones to recognize other colonies in the area.

Since fake nests do not have these pheromones, some wasps may not consider that area dangerous.

Finally, the relative acceptable distance between the wasps’ nest is unknown.

Therefore, wasps can build a nest that is relatively close to each other by human standards.

For instance, hanging a fake wasp nest in front of your yard doesn’t mean wasps will not establish a colony on the opposite side of your home.

Why Do People Think Fake Wasp Nests Could Work?

Wasps are territorial and will avoid areas where there is an already established wasp nest.

Wasps use visual cues to create landmarks and remember areas to avoid.

People use fake wasp nests to trick wasps into thinking their home is already occupied by another colony, effectively keeping their property wasp free.

Do Wasps Reuse Their Own Nests?

Wasps do not reuse old nests. But, they may select the same nesting location year after year if it’s ideal.

Wasps may create a new nest next to an old nest. But they will not reuse old nests.

What time of year do wasps go away?

Wasps colonies die as temperatures begin to drop. Pregnant female wasps hibernate during winter while the rest of the wasp colony die out.

The pregnant wasps will begin looking for an ideal location to establish a colony once winter is over. Wasps are most active during spring and summer.

Do Wasps ever leave their nests?

During the day wasps leave their nest to forage.

Yes. Adult wasps leave the nest to forage during the day. But they spend the night inside the nest caring for the young.

Wasps leave their nests permanently to hibernate once the temperatures drop.

After leaving they will look for a secure place to live. This can include inside homes, under logs, under other objects that provide protection.

What month Do wasps die?

Wasp colonies die as soon as temperatures begin to drop. The exact month of the year when this happens can vary based on location.

Pregnant female wasps hibernate during winter while the rest of the wasp colony die out.

Female wasps leave their nest during winter to hibernate. They choose warm, undisturbed locations such as under logs, inside small holes, or crevices.

Once the winter is over, female wasps will end hibernation to establish a new colony.

What happens if you leave a wasp nest?

Wasps do not re-use old nests. So, if you have an empty wasps nest in your home, you don’t necessarily have to remove it.

That said, having a wasp nest in your home is an indication that wasps find your location ideal to start a colony. And wasps may use their old nest as a landmark to create a new nest once winter is over.

So, while wasps do not re-use old nests, they may establish new ones right next to them.

How Long Does a Wasp Nest Last?

Wasp colonies are active during spring and summer. They will use their nest for about 4-6 months before leaving it to hibernate. Once the temperatures drop, most of the colonies will die. Female wasps will leave the nest to hibernate.

Where do wasps go in the winter?

Wasps colonies die as temperatures begin to drop. Mated female wasps hibernate during winter. All the other wasps in the colony die out.

Once winter is over, the mated female wasps will begin looking for an ideal location to establish a colony.

Should I remove Wasps Nests?

Only remove a wasps nest if the location is dangerous for humans and pets.

If they are located near an area where there is high traffic, then it is a good idea to remove it.

Otherwise, it’s best to leave the nest alone and wait for the winter season.

The wasp colony will die as soon as the temperature drops. Once the nest is empty, you can then remove the nest quickly.

How To Remove Active Wasp Nest

The easiest way to remove a wasp nest is to wait until winter. Wasp colonies die as temperature drops. Once this happens, you can remove the nest without worrying about getting stung.

That said, waiting for winter may not always be the best option. If, for example, the nest presents a danger to humans, it makes sense to remove it right away.

Below are a few ways to remove an active wasp nest from your property.

To remove active nests, begin by spraying the nest with insecticide.

The most effective ones are foam sprays. These sprays cover the entire nest to trap and kill all the wasp inside.

You would want to do this at night when the wasps are least active.

Make sure to wear protective gear such as goggles, pants, and long sleeves.

Keep your distance and cover all entrances to the nest when spraying. 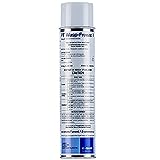 Another way to remove the active wasp nest is by calling a professional. This method is the easiest and safest way to remove an active nest.

I recommend calling a professional, especially if you’re allergic.

Some wasps nests are aggressive. If this is what you have at home, it may also be best to call a professional. Aggressive wasps can swarm you, and their sting can be pretty painful.

Wasp nest removal in the US is generally between $100-$500. The price varies depending on your location and how easily one can access the nest.

Overall, the harder it is to get rid of the nest, the more costly the removal will be.

Wasps traps are another way you can remove the active nest safely from your home.

The trap is designed to lure the wasps outside of their nest and trap them.

For this method, you can either purchase a wasp trap or DIY.

Cut the top of the bottle (about 1/4). Flip it upside down to create a funnel.

Next, pour an attractant liquid inside. Water should suffice for this, but diesel fuel is more effective. The liquid in the bottle should kill any wasps that land inside.

For wasp nests in high locations, it’s best to use an extension arm.

You can use an extension arm to scrape the nest until it falls off.

How To Get Rid of Inactive Nests

The easiest way to remove a wasp nest is to wait until winter, when the wasp abandons their nests.

Once the nest is empty, it should be easy to remove it from your property. Here’s how.

As the name suggests, this method requires a plastic bag to remove the nest.

Make sure to get a bag large enough to cover the nest.

Cover the wasp nest with the plastic bag and slowly detach the nest from wherever it’s hanging.

Seal the bag and dispose of the nest.

I recommend bringing an insecticide spray for this method, just in case the nest is not inactive.

2. Use an Extension Arm

For wasp nests in high locations, it’s best to use an extension arm.

Extension arms allow you to easily reach the nest. You can use an extension arm to scrape the nest until it falls off.

You can place a plastic bag at the bottom of the nest to catch any debris that falls from the scraping. Having a plastic bag will make it easier to clean once you’re finished.

A pressurized water sprayer works excellent for inactive nests that are hard to reach.

So for wasps nests that are high or tucked between branches or holes, the pressurized sprayer is an excellent removal method.

Do not use this method for active wasp nests to avoid getting swarmed and stung. 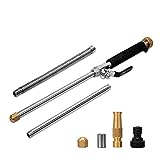 How To Prevent Wasps Nest

Wasps nests in your property, while generally harmless, can be dangerous to you and your family.

For instance, if the wasp is too close to your home or the wasps are aggressive, you’ll probably want to remove it.

But as always, prevention is better than cure. Below are several steps you can take to keep wasps from establishing a nest near your home.

What Attracts Wasps To Your Home?

There are several things in your home that could potentially attract wasps. Below are the most common attractants: